BUSINESSMED and EMEA sign MoU, aiming to further contribute to the development of the Euro-Mediterranean region

EMNES > Partners News > BUSINESSMED and EMEA sign MoU, aiming to further contribute to the development of the Euro-Mediterranean region 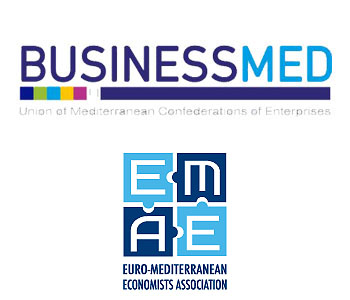 On 23 July 2018, the Union of Mediterranean Confederations of Enterprises (BUSINESSMED) represented by its General Secretary, Mrs. Jihen Boutiba Mrad, and the Euro-Mediterranean Economists Association (EMEA), represented by its founding President, Professor Rym Ayadi, signed a Memorandum of Understanding (MoU) in the framework of the project “Enhancing Business Support Organisations and Business Networks in the Southern Neighbourhood” (EBSOMED), with the purpose to enhance the Euro-Mediterranean business ecosystem and to support the social and economic development of the economic stakeholders. EBSOMED is a 4-year project, co-funded by the European Commission, led by the Union of Mediterranean Confederations of Enterprises, that aims at boosting the Mediterranean business ecosystem promoting an inclusive economic development and job creation, by enhancing the private sector organisations in the Southern Neighbourhood countries.

The two organizations will cooperate where and when feasible and appropriate, aiming at maximizing bilateral and multilateral Euro-Mediterranean cooperation. The enhanced collaboration among BUSINESSMED and EMEA shall also commit to develop an investment-friendly environment and thus foster private sector initiatives in the Mediterranean region, in order to establish a stable, sustainable and long-lasting economic growth. Among the activities agreed by the two organizations is to be involved in exchange programs of research and to collectively develop joint innovative researches and business support projects.

The Euro-Mediterranean Economists Association (EMEA) is an independent think-tank specialized in socio-economic and financial developments in Europe and the South and East Mediterranean. EMEA has an international network of think tanks, research centers, academic institutions and International experts, and aims to contribute decisively to the transition process in the Mediterranean region amidst an unprecedented global financial and economic crisis and geopolitical uncertainties and conflicts. EMEA promoted and co-funded the Euro-Mediterranean Network for Economic Studies (EMNES).

Previous Participation of EMEA/EMNES to the 2018 WOCMES Think Tank Forum in Sevilla, Spain
Next EMNES/EMEA participation to T20 Group – Argentina 2018