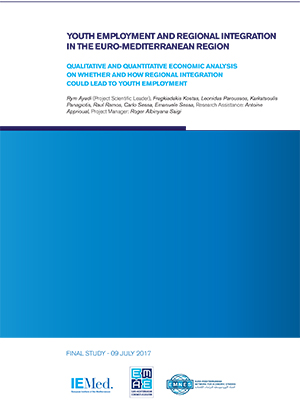 A major study examining how regional integration can provide both short and long-term solutions to the employment crisis in the Euro-Mediterranean region has concluded that domestic labour markets have failed to create sufficient employment opportunities – particularly for young people and women, including graduates.

The reasons for current failures include skill mismatches, rigid regulation and limited deregulation, the weight of the public sector and its influence on educational choices, as well as issues related to the persistence of certain socio-cultural norms.

The Study asserts that the main challenges to improve the current situation demand greater facilitation of workers’ employability, by achieving a better match between labour supply and demand.

The demand side would require a more complex policy mix of actions, including generating jobs by improving competition as a result of deregulation, by investing in infrastructure and adopting smart-specialization strategies that would bring more benefits from further regional integration.

The Study concludes that deeper integration between the region’s countries could boost employment, especially by providing better access to markets through the elimination of trade barriers.  Ending import tariffs could make domestic prices fall to the lowest regional levels, but also create trade in the liberalised region.

Despite the European Union had helped lay the groundwork for trade and economic integration in the Euro-Mediterranean region through its commitment to long lasting European integration, Southern and Eastern Mediterranean countries are lagging behind. This is because they have not achieved sufficient levels of integration to ensure a more balanced and coherent integration of markets, the Study says.

For there to be more satisfactory outcomes for employment in the future, then greater South-South integration is considered a pre-condition, as part of wider regional integration, the Study suggests.

Potential actions that countries could take to deliver sustainable GDP growth and stimulate permanent jobs for the youth sector are linked to “process harmonisation and on de-risking of their economies”.

In particular, this would be achieved by reducing technical barriers to trade that are incompatible with WTO rules, making it easier to do business, improving regulatory quality and increasing political stability.

Using qualitative and quantitative research to analyse the period between 2015 and 2040, the Study concludes that in a regional integration scenario, characterized by “the status quo’s shallow economic integration conditions”, youth unemployment rates are predicted to fall from 25.7% in 2015 to 17.6% in 2040 – as long as countries take action to reduce public budget deficits, improve trade balances and upgrade their infrastructure.

Regional Euro-Mediterranean integration would have a net positive impact on youth employment, the Study indicates. Depending on its degree and type, net additional youth jobs in non-Euro Mediterranean countries would range from 221,000 by removing trade barriers, to 423,000 as a result of institutional and process harmonisation.

Over the same period, net additional jobs for total employment in the non-Euro countries would range from 1,520,000 by removing trade barriers, to 2,864,000 with institutional and process harmonisation.

Meanwhile, full integration involving both the removal of trade barriers and improved institutional and process harmonisation would account for 570,000 additional youth jobs as part of a total of 3,835,000 extra jobs.

“The impact from process harmonisation, institutional improvement and investment de-risking would provide the best prospects in terms of youth employment job creation,” confirms Rym Ayadi, the scientific leader of the research.

“This would be mainly due to the positive impact this would have on overall economic activity and the alignment of skilled labour with capital”, she adds.

For an integrated economy, a timely upgrade of human capital is necessary to prepare the skills required to match the requirements of the sectors expected to contribute to youth employment – primarily business and financial services, construction and energy intensive industries.

The Study also looks beyond conventional model-based economic analysis, devising a future job–friendly scenario which responds to technological progress and long-term challenges, such as robotisation and digitalization trends. Here, investment and regulation could help facilitate employability, a shift to new jobs and more flexible work organisation.

Focusing on regional dynamics in the Euro-Mediterranean area, technological progress and drivers of global competitiveness, resource and innovation mercantilism would play their part in shaping future regional development.

The Study’s findings conclude that closer regional integration is essential for economic compatibility and to provide long-term solutions for youth unemployment.

“This new policy for the region will develop a new constructive dynamic, which will boost investment, regional projects and infrastructure development, in which the Union for the Mediterranean can take a leading role. This would create a multiplier effect in terms of economic growth and job creation”, concludes the scientific leader of the research

Study: Youth employment and regional integration in the Euro-Mediterranean region