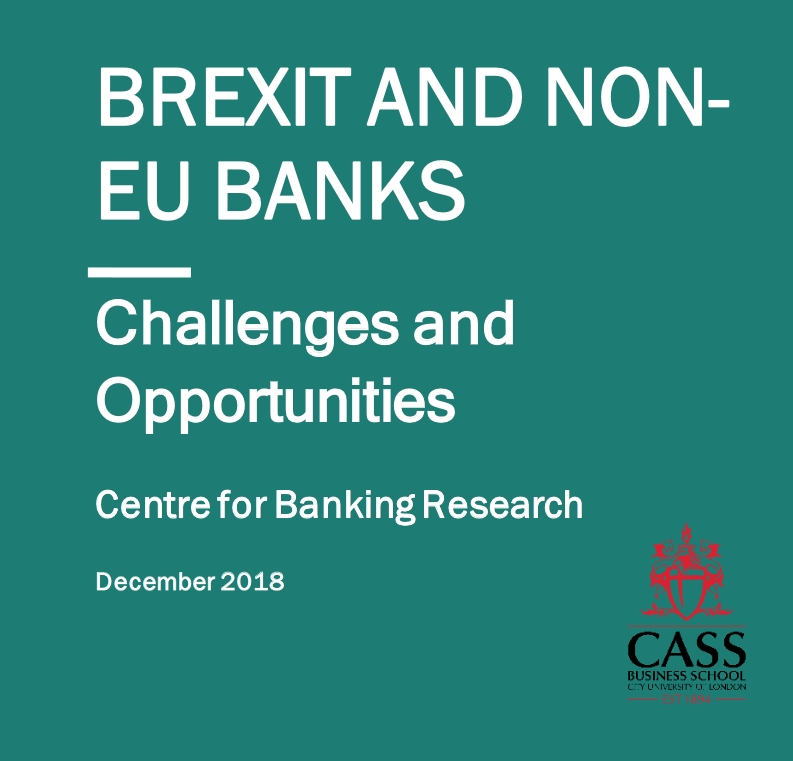 “Brexit and non-EU Banks: Challenges and Opportunities” is published by the Centre for Banking Research at Cass Business School, a partner of the Euro-Mediterranean Economists Association (EMEA).  It has been compiled by the Director of CBR and member of EMEA Expert Panel, Professor Barbara Casu Lukac, and Dr Angela Gallo, with contributions from the President of EMEA, Professor Rym Ayadi, Professor Thorsten Beck and Dr Marco Boldini.

A new report by Cass Business School has found that although there are some indicators that a post-Brexit London may lose some of its financial services business to EU competitors such as Paris and Frankfurt, there are clear competitive advantages to operating in the City which will be difficult to replace – at least in the short term.

Ongoing uncertainty surrounding the post-Brexit financial services agreement between the European Union and UK has forced major banks and other financial institutions to undertake contingency planning and consider moving staff and operations to the EMEA region.

The report considers how financial institutions can respond to the two main areas of risk following Brexit – political uncertainty and regulatory uncertainty – and discusses several suggestions about how these risks could be managed.  The researchers also tested their predictions with a survey of figures from the financial industry and their views confirmed the findings of the report.

In the absence of a comprehensive trade deal in financial services – or even a clear indication of what such a deal might entail – financial institutions risk having no replacement for passporting rights, which currently allow them to offer products and services in all EU countries. In this context, multinational banks face two options to deal with this – corporate restructuring to move operations and staff to other financial hubs and the delegation management model which allows the bank to select a legal entity in the EU for passporting and intermediate parent undertaking (IPU), whilst maintaining an entity in London for other activities.

The report finds that the delegation management model is a possible alternative to corporate restructuring due to its flexibility which will minimise the risk of the loss of human capital expertise and cut the costs related to moving people and functions, whilst avoiding the loss of permanent access to the UK.

The report argues that there are a number of factors that will enable London to retain its position as a global financial hub after Brexit.  These include its time zone, which allows it to trade easily with Asia, the US and Middle East; its joint status with New York as the dominant FX and interest rates trading hub; the strength of local law and regulation; the superior global reputation of UK universities’ teaching in business and finance; and the high degree of capital market integration.

Report co-author Professor Barbara Casu Lukac, Director of the Centre for Banking Research at Cass, said the report comes at an important time in the protracted Brexit process, as the immediate risk of a no-deal Brexit recedes but as the Prime Minister Theresa May battles to secure an exit deal.

“Our report suggests that London will continue to be a key player in the global financial services industry and capital markets, following Brexit.  However, some of its operations, capabilities and margins will be affected by the long-term political regulatory uncertainty underlying the Brexit process.  This is something that should be given due consideration as MPs debate the Prime Minister’s Withdrawal Agreement in parliament.”

Link to the report