EMEA participated at the 4th Regional Forum of the UfM: “Climate and Environment in the Mediterranean region, our common challenge”

EMNES > News > EMEA participated at the 4th Regional Forum of the UfM: “Climate and Environment in the Mediterranean region, our common challenge”

Background and objectives of the event:

Under the umbrella of the Regional Forum, a special event took place at the UfM providing an opportunity for scientists, stakeholders and policy makers to discuss the main vulnerabilities in the Mediterranean region, as well as its resilience to climate change. In that regard, the aim was to address the knowledge gap and lack of comprehensive and pertinent information by discussing the main findings of the first-ever scientific report on the impact of climate change in the Mediterranean. The network of Mediterranean Experts on Climate and Environmental Change (MedECC) produced this report with the purpose of developing efficient policy responses to climate change and make information accessible to decision makers. 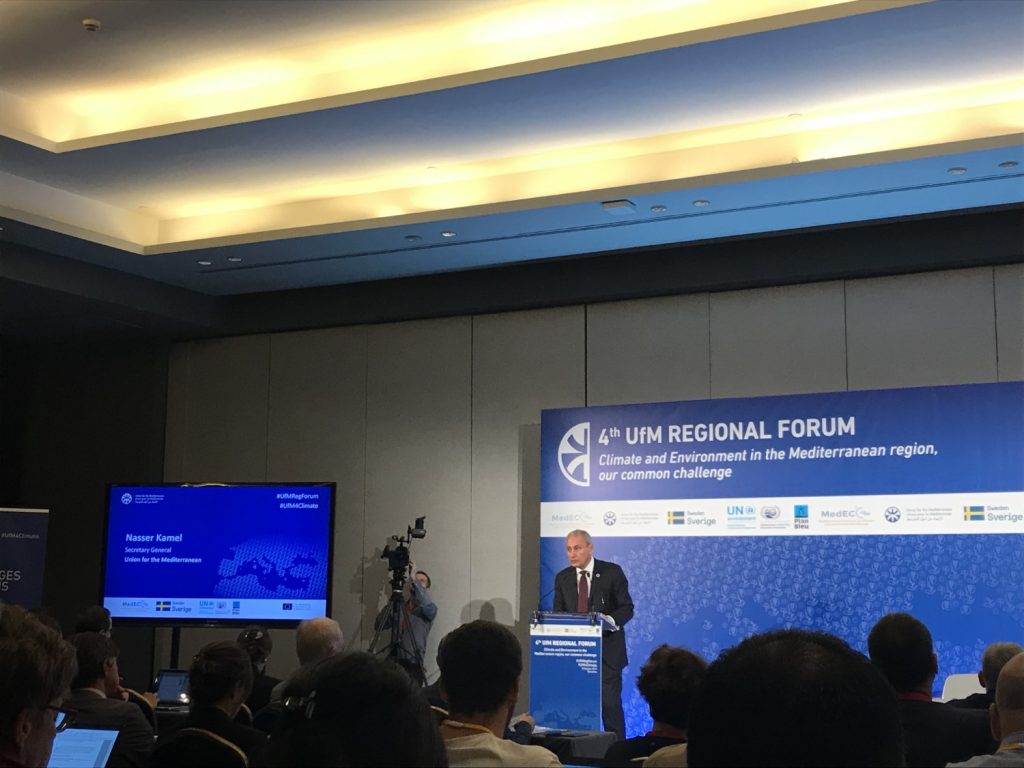 H.E. Nasser Kamel, Secretary General of the Union for the Mediterranean, emphasized the need for establishing a science-policy interface to tackle climate change and environmental degradation and enhancing climate finance in order to address regional challenges. In this regard, the UfM Secretariat considers climate action as a top priority.

Maciej Popowski, Deputy Director General of European Neighbourhood Policy and Enlargement Negotiations at the European Commission, in his introductory speech, referred to the blueprint of the new Green Deal for Europe (currently under preparation) which will demand for more climate-related action in the new multiannual framework of the European Commission. 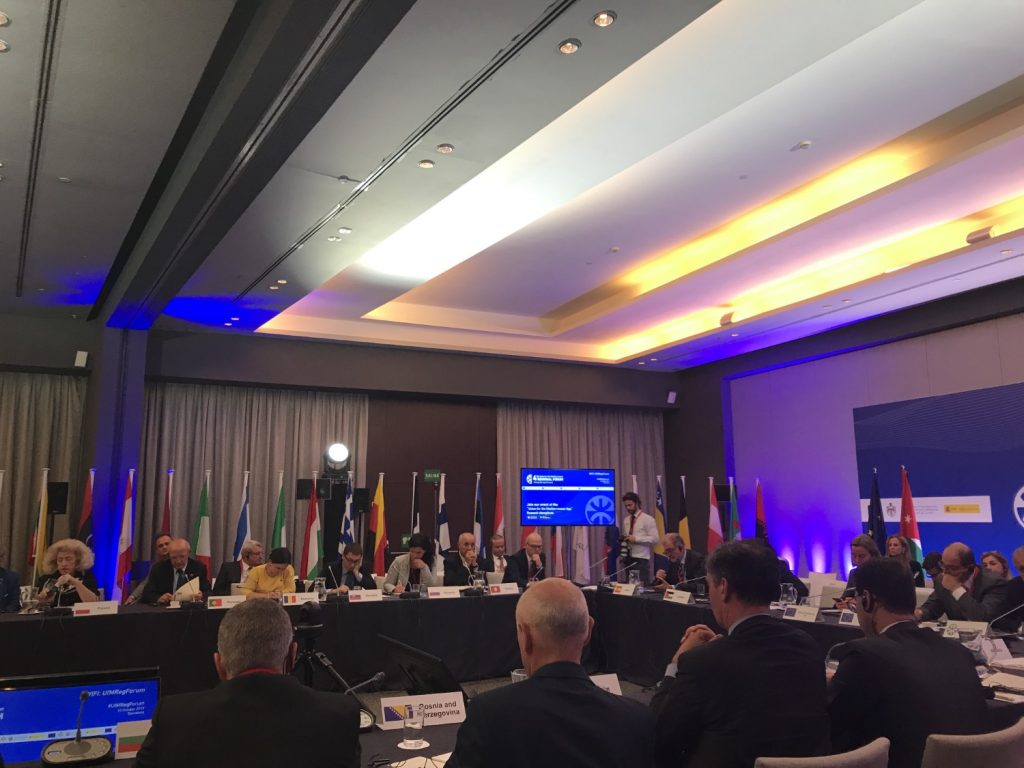 Mediterranean Assessment Report on the risks associated to climate and environmental changes in the Mediterranean region:

After a brief presentation of the MedECC Network by Elen Lemaitre-Curri, Director of the UNEP MAP Plan Bleu, Prof. Dr. Wolfgang Cramer, MedECC Coordinator and Prof. Dr. Semia Cherif, Coordinating Lead Author for the MedECC, presented the first results of the upcoming report.

The history of global warming goes back to pre-industrial times, however, it significantly accelerated since 1980.

The red scenario defined by MedECC refers to an increase of up to 5ºC of the annual mean air temperature. However, even a low increase scenario (1.5ºC) may have thousands of consequences at both molecular levels and on the environmental systems. Prof. Sherif gave a few examples of such an impact referring to the changes at a physical state in the human body (i.e. water, proteins, lipids). On the level of the environmental system, the deoxygenation of seawater and the acceleration of photochemical reaction in the atmosphere are both consequences of climate change.

Extreme events are expected to increase due to climate change (impacting all living organisms ranging from water, air to the food we eat and our homes). As the findings of the study show, the world’s major water scarcity is the Mediterranean basin (South). The ratio of renewable water resources per capita is the lowest compared to other regions of the world. Both surface water and underground waters are expected to be impacted by climate change (evaporation scenarios in case of the former and increased salinization in case of the latter). The agrarian activity in coastal areas is at risk of inundated land and groundwater salinization from sea water intrusion thereby causing the abandonment of wells. Seawater acidification and increased sea temperatures have already caused a loss of 41% of top predators including marine mammals and 34% of fish species are lost due to overfishing and the deoxygenation of seawater. In fact, the average maximum body weight of fish is expected to shrink by 49% by 2050. The food demand is set to increase due to the population growth, and shortages will also rise when crops, fish and livestock yields decline. The food security in the region is condemned due to land degradation and human-caused climate change.

Based on the observations made during the period 1982-2015, a foresight analysis has been conducted by MedECC. They observed on average an increase of 0.03ºC per year (i.e. 1.08ºC during the analysed period). Other key issues were raised, such as the coral bleaching (which is a consequence of heat waves in the sea) or the fact that ice melting reached a level on Greenland where it cannot be reversed. Sea level rise, acidification of the atmosphere (i.e. increased CO2 emissions) and exodus from rural areas are all related to climate change. The increased number of fires driven by drought is also related to land use and the authors of the study call for better landscape management practices in order to prevent droughts and consequently fires. Another observation of the study mentioned by the authors is the fact that species are forced to migrate to higher elevations in the mountains.

Climate change has consequences on human health as well especially for elderly, children and those with limited access to health care and those exposed to high temperatures with no air-conditioning.

When it comes to conflict situations and global warming, it is considered that the latter may have indirect impacts on the former. Taking Syria as an example, the droughts in the period 1980-1990 destabilised the agriculture and therefore had an effect on the economy. There is a general consensus among scientists that additional warming and droughts put additional stress on the economic system. The foreseen scenario for the future is that both the sea level and temperature rise will impact coastal farm holders. Plus, conflicts concerning the use of limited resources (land, water, food etc.) may increase and further escalate large-scale human migrations. 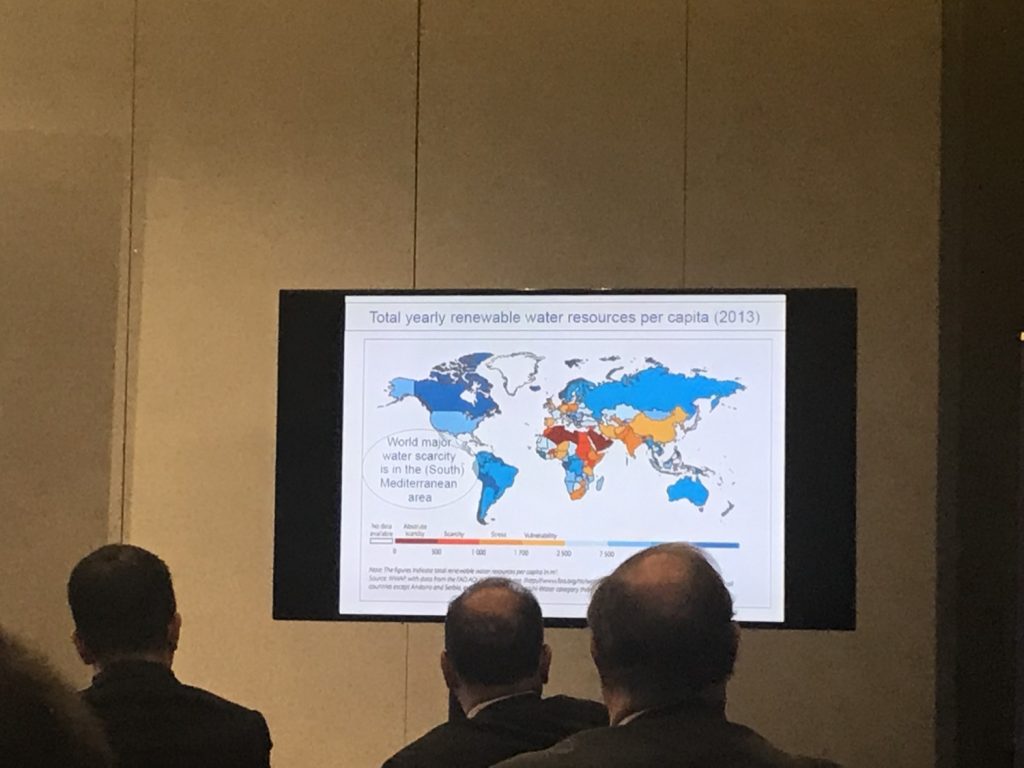 Overall findings of the study:

The report indicates that the Mediterranean basin is warming 20% ​​faster than the global average and that the region is one of the main hotspots of climate change in the world, where 250 million people will be considered « water poor » and will suffer of “water stress” within 20 years. Projections expect temperatures to increase by 2.2 ° C by 2040 compared to pre-industrial times.

Furthermore, droughts have occurred with increasing frequency since 1950s and heat waves are becoming stronger and more frequent implicating the development of heat-related illnesses.

The finalized report will be presented in 2020 in a meeting of Environment Ministers from UfM Member States.

Previous EMEA/EMNES participation at the Mediterranean Energy Debate on “The challenge of local energy governance: the model of the MED Efficient Buildings Community”
Next The Euro-Mediterranean University of Fez and the Euro-Mediterranean Network for Economic Studies EMNES organise the workshop “Migration, Mobility and Development”