EMNES 3rd Annual Conference – 2019: “Towards A Regional Integration and Employment Driven Socio-Economic Model in the Mediterranean: A Comprehensive Policy Roadmap” 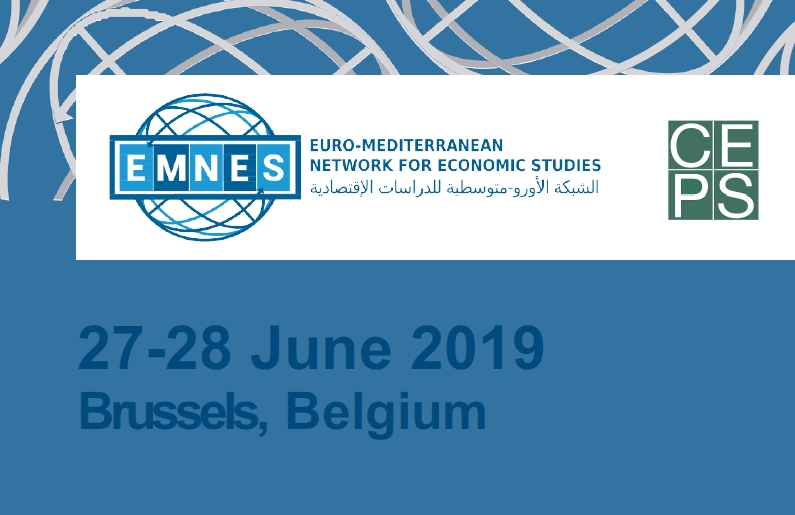 The Euro-Mediterranean Network for Economic Studies (EMNES) organizes its Third Annual Conference – 2019: “Towards A Regional Integration and Employment Driven Socio-Economic Model in the Mediterranean: A Comprehensive Policy Roadmap”. The event will take place at the Centre for European Policy Studies (CEPS) in Brussels on 27-28 June 2019.

The Euro-Mediterranean region brings together a diverse set of countries with different cultural backgrounds as well as economic social realities, which are each developing at a varying pace and with variable geometry. While for centuries such differences were seen as wealth, in recent years, the Mediterranean Sea has become a dividing line between conflicting civilisations. This has led to deeper political uncertainties, mounting economic difficulties, and social tensions without any of the two parts, being able to resort to concrete cooperation. In this perspective, it is difficult to argue that Euro-Med relations delivered on the promise of achieving shared prosperity through enhanced political association and economic integration. The combination of the Arab uprisings, the euro area crisis and the refugee crisis clearly played a major role in shaping the final outcome and populations perceptions. However, the way such crises played out raises a fundamental question about whether the existing model of integration and cooperation among the two regions is appropriate.

Against this background, the EMNES Annual Conference 2019 will debate what future model of economic development and cooperation can be envisaged. The conference will bring together the views of the EU, the South Med countries and the main players active in the region. The EMNES team will contribute to the discussion by featuring key findings on how labour markets can become more dynamic and help delivering shared prosperity as well a comprehensive policy roadmap towards new models of regional integration and employment creation in the Mediterranean.

EMNES is proud to announce that several senior policy makers, experts and well-known economists will participate to the conference, including:

The Euro-Mediterranean Network for Economic Studies (EMNES) is a network of partners and associates research institutions and think tanks working on socio-economics in the Euro-Mediterranean. EMNES is supported by 30 Universities and Research Institutions from Algeria, Belgium, Canada, Egypt, France, Germany, Greece, Italy, Jordan, Morocco, Palestine, Slovenia, Spain, Tunisia, Turkey and the UK, and it is co-funded by the European Commission and the Euro-Mediterranean Economists Association (EMEA).